16.02.2020 - Swiss victory on the Haut-Plateau on Sunday in the Super-G. Jasmina Suter managed to dominate the big Austrian favourites, claiming her first victory in the European Cup.

After two downhills on the Mont Lachaux piste, the ladies competing in the European Cup competed against each other in the Super-G on Sunday. The presence of Tina Weirather didn’t upset the hierarchy. The Liechtenstein skier couldn’t keep pace, and had to abandon the race. Switzerland’s Jasmina Suter clinched the victory, her first in the European Cup. Already in third place in Saturday’s downhill, she confirmed that she felt very much at ease in Crans-Montana. «It wasn’t all perfect. But in the Super-G, if you don’t make any mistakes, it means that you’re not going very fast», adds Jasmina Suter. The Schwyz local won in 51’’57’’, beating Austria’s Nadine Fest by just four hundredths of a second. Rahel Kopp took the third podium place, 0’’44 behind.

After the three races held in Crans-Montana, Nadine Fest ends up the overall winner in the Valais stage of the European Cup. After one victory and two second places, the Austrian strengthens her first place in the overall rankings of the European Cup, 244 points in front of her compatriot Rosina Schneeberger. She is also in the lead in both the Super-G and downhill rankings.

At the time of evaluating the event, Marius Robyr, president of the Crans-Montana World Cup and European Cup organisation committee, says he is very satisified:  «In running these races, we are working for the future of skiing. The girls learned a lot during their stay in Crans-Montana. And for us as organisers, it means we can also fine-tune details for the World Cup races next week. » The White Circus will once again be stopping off on the Haut-Plateau, with two downhills on Friday 21 and Saturday 22 February, as well as an Alpine Combined on Sunday 23 February. 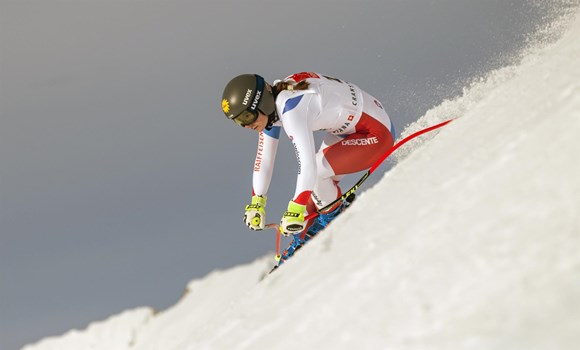 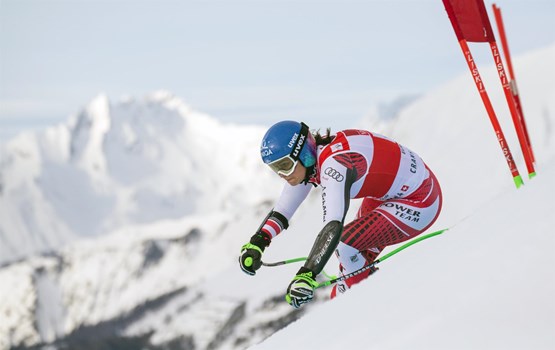 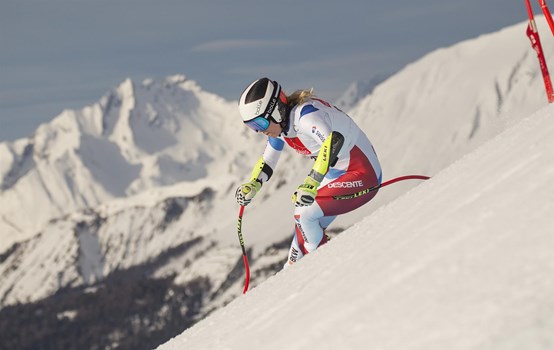 16.02.2019 - The Ladies’ European Cup circuit stopped off in Crans-Montana on Saturday 16 and Sunday 17 February for two Downhill races. During the first race, which was held in perfect conditions, Austria totally dominated the field on the Mont-Lachaux piste. Elisabeth Reisinger won in 1’13’’41. Nina Ortlieb, daughter of the Olympic and World champion Patrick Ortlieb, finished second with + 0’’08, and Ariane Raedler completed the  podium line up in + 0’’27. Elisabeth Reisinger therefore confirmed her form, after dominating the two training sessions on Thursday and Friday.

As for the Swiss competitors, the best result went to 22 year old Nathalie Groebli from Nidwald, who is generally more comfortable in the giant slalom, in 6th place with + 0’’71. As for Priska Nufer, she took 11th place with + 0’’94 and Stephanie Jenal took 12th position with + 1’’03.

One of the attractions this weekend is the presence of Ilka Stuhec in Crans-Montana. The World Downhill champion attracted a lot of attention, but in the training sessions she couldn’t manage better than 4th place, with + 0’’46. The smiling Slovenian signed autographs at the finish stadium,  not just for spectators but also for some of her fellow competitors who see her as a role model. 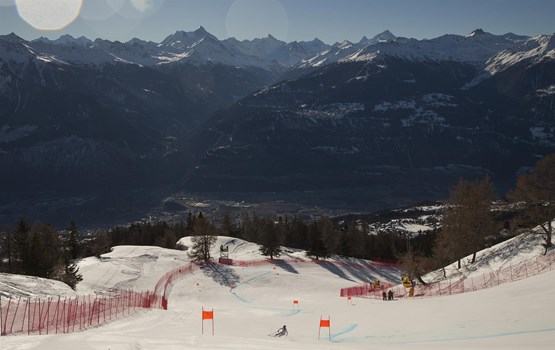 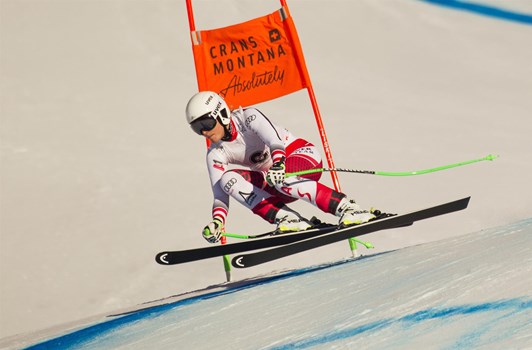 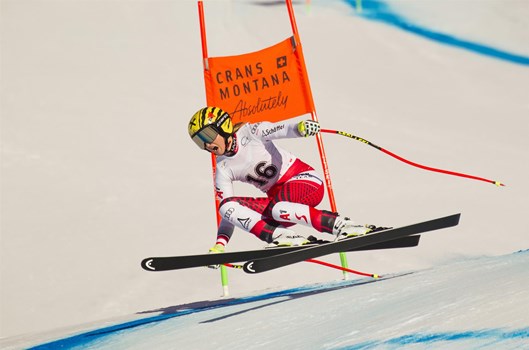 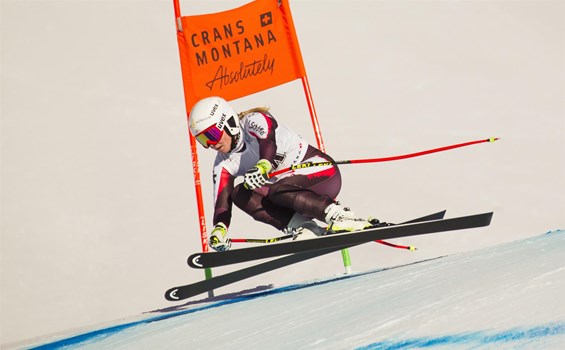 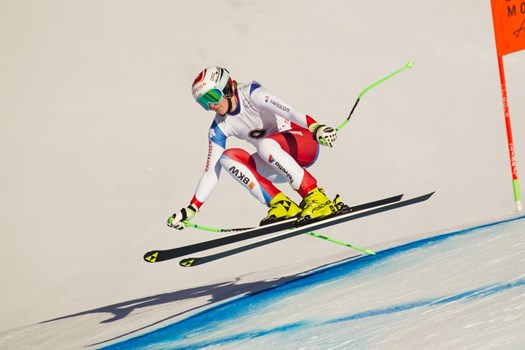 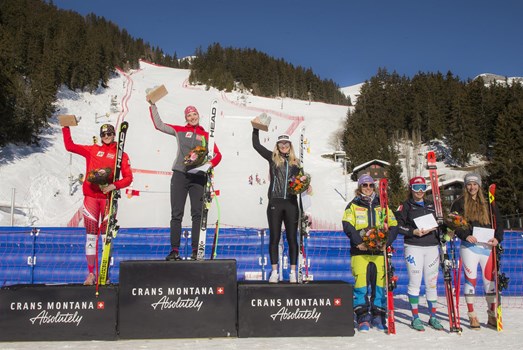 Reisinger is once again fastest

The first European Cup Downhill is programmed for tomorrow, Saturday 16 February at 08.45. It is the same for the second Downhill on Sunday 17 February. 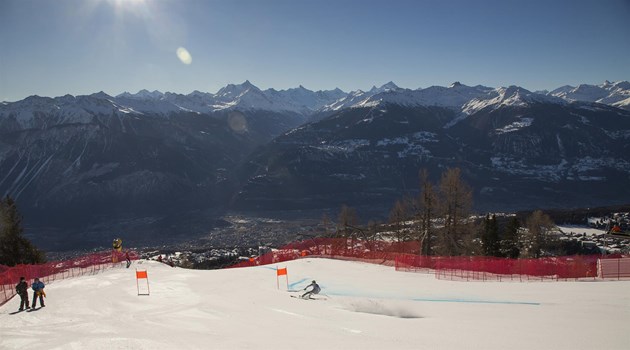 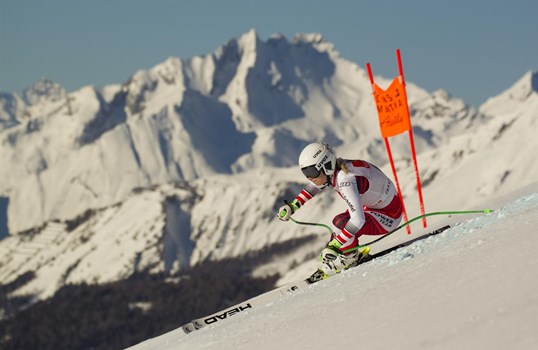 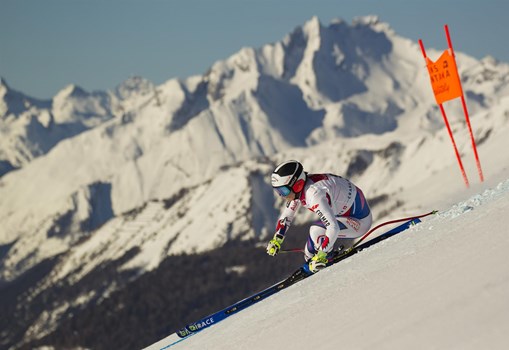 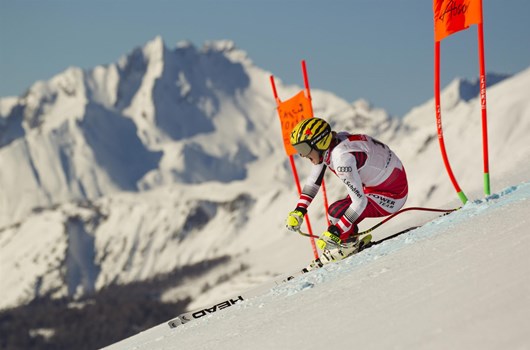 14.02.2019 - The first training session on the Mont-Lachaux piste took place in optimal conditions on a perfect piste. For the competitors, it was their first contact with the course, and a test of their capacity to master the difficulties in order to find the best line.

The World Champion Ilka Stuhec stated that she was delighted to be racing on this piste in these conditions in order to accrue training heats for the races ahead, in particular for those taking place next week.

The second training is programmed for tomorrow, 15th February at 09.00.

The world Downhill champion, Ilka Stuhec, in the line-up for the European Cup in Crans-Montana

12.02.2019 - After a positive snow check by the FIS, Crans-Montana awaits the Ladies’ World Cup on 23 and 24 February for a Downhill and an Alpine Combined heat. But before that, all attention will be on the next generation, when the best speed competitors in the European Cup will meet on the Valais Haut-Plateau. Two Downhills are programmed for Saturday 16 and Sunday 17 February on the Mont Lachaux piste, with two training sessions planned on the Thursday and Friday. The start time each day is planned for 10.15am.

The event will feature some 60 skiers from 14 countries. Amongst them, Slovenia’s Ilka Stuhec, who has just been crowned the Downhill queen at the World Championships in Åre. After four of the seven Downhills scheduled this season, Italy’s Nadia Delago is leading the discipline in the European Cup, with 380 points.

The 21 year old hopeful from Val Gardena has won three races this winter, at Val di Fassa and twice in Zauchensee. The only other Downhill win this season went to Austria’s Elisabeth Reisinger, who is 90 points behind in the overall rankings. The 22 year old skier is however dominating the overall European Cup ranking.  After 26 of the 34 races this winter, she is 101 points ahead of the Italian Roberta Milesi.
The Swiss women are also hoping to shine on their home territory in Crans-Montana. Juliana Suter, Luana Flütsch and Noémie Kolly are in 3rd, 4th and 5th places respectively in the Downhill rankings, behind the Delago/Reisinger duo. Juliana Suter has already achieved three podium places, while Luana Flütsch has managed it once.  So anything is possible for the Swiss skiers in Crans-Montana, who are hoping, via the European Cup, to secure their place for the  2019/2020 World Cup.

9.02.2019 - On his return from Åre,  Marius Robyr, president of the 2019 European and World Cup races, was satisified to see that the preparation is going smoothly in all areas.

Work on the Mont Lachaux piste, supervised by Markus Murmann, the Race Director, is well underway, the A nets are in place and various sectors have been sprayed. All of this has been thanks to precious help from the heads of different sectors and their assistants, volunteers and also men from the civil protection. Promising young competitors in training have « tested » the piste. From Wednesday 13 February onwards, the military will be on duty : some 180 men from the Inf Kp 13/1 and Inf Kp 13/3 sections will be helping the Organising Committee in different domains.

The two Ladies’ European Cup races on Saturday 16 and Sunday 17 February will be preceded by two training rounds (14/15.02). It will be the same for the World Cup races the following weekend, on 23 and 24 February, with training on 21 and 22 February. The FIS International Ski Federation will be carrying out its own snow control on the Mont Lachaux piste on Monday 11 February. 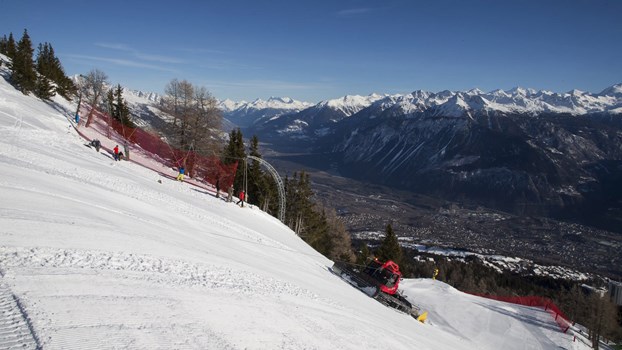 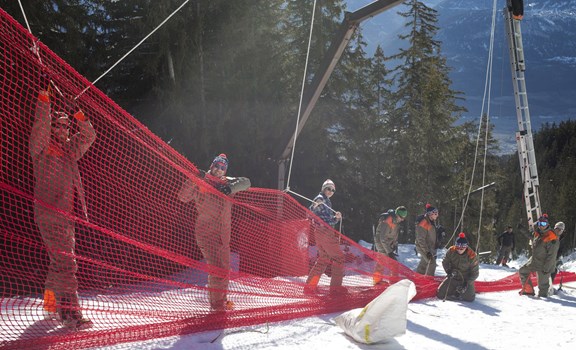 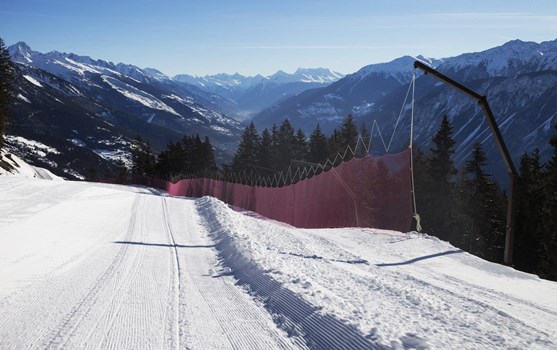 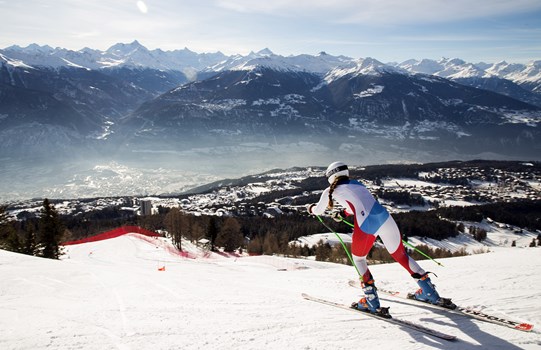 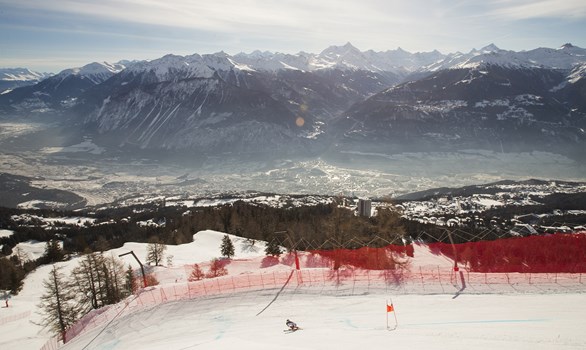 Victory for Jasmine Flury in the Super-G

A superb Swiss victory in the Super-G brought  the Crans-Montana European Cup to a close. Jasmine Flury took first place with a time of 1:11.06, in front of Nina Ortlieb (AUT) with +0.13 and Tina Weirather (LIE) with +0.25. The podium line-up was completed by Ariane Raedler (AUT), who dominated in the recent downhill races, with +0.56. The Top 10 features : two more Austrians, one Norwegian, one Swede and two Swiss, Joana Haelen, 9th with +1.37, and Rahel Kopp, 10th with +1.42. It should be noted that half of these ten competitors took part in the recent Olympic Games.

Austria dominates in the third Downhill

The third Downhill in the European Cup (replacing Zauchensee) took place in postcard-like scenery in Crans-Montana today, once again in very low temperatures. The Austrian team enjoyed a triple victory, with a win by Ariane Raedler in 1:16.83 (placed 1st and 7th yesterday) in front of Nina Ortlieb, with +0.63 (6th and 4th yesterday) and Martina Rettenwender with +0.79 (also placed 4th twice yesterday). Switzerland’s Priska Nufer (3rd and 1st yesterday) placed 4th with +0.82. So the Top 10 features : 6 Austrians, one Swiss, two Swedes and one German competitor.

27.02.2018 - There’s satisfaction in Crans-Montana, as it was possible to hold the two downhill races planned for Tuesday. They took place in freezing temperatures ( -18 to -14 degrees) on a piste in perfect condition, and the sometimes changeable visibility didn’t get in the way of consistency in the racing. The piste proved faster than in the training sessions, whilst almost the same competitors were ranked in the top places.

In the first downhill, Austria managed a winning double with Ariane Raedler taking first place ahead of Christine Scheyer, and Switzerland’s Priska Nufer coming in third place. Six competitors from Austria were placed in the Top 10, with one from Switzerland, one from Italy, one from France and one from Russia.

The second downhill saw our own Priska Nufer (3rd in the first descent) taking her revenge, as she widened the gap between Sweden’s Lisa Hoernblad, who was second with +1.10 and Lin Ivarsonn, third with +1.22. Following, in order, were five Austrians, one Norwegian and one French athlete. Therefore seven out of the top eleven competitors in the first leg were placed in the Top 10 of the second leg.

25.02.2018 - Due to persistent fog on the course, the 2nd training session planned for Sunday had to be postponed several times, and was finally definitively cancelled. As a second training session is absolutely essential, the jury has modified the programme for Monday 26 February, as detailed below:

24.02.2018 - The first training day on the Mont-Lachaux piste took place in optimal conditions on a perfect piste. For the competitors, it was a first contact with the course, and with their ability to master the difficulties of the descent in search of the best line.

The best time recorded was by Austria’s Nina Ortlieb, ahead of three of her compatriots. The best of the line-up of 12 Swiss was Priska Nufer, who came in 9th place.

5.12.2017 - In the past, Crans-Montana has organised over 40 FIS European Cup races on its « Nationale », « Mont Lachaux » and « Chetzeron » pistes. Since 2008, there have been fourteen races (nine mens and five ladies) , and note that the resort has also had successful experiences with the FIS European Cup finals in 2009, as well as the FIS Junior World Championships in 2011. From now on, Crans-Montana will host a heat of the European Cup every year, just before the arrival of the FIS World Cup. The Ladies World Cup stops off this season on 3 and 4 March 2018, on the Mont Lachaux piste, the European Cup races are therefore programmed for Monday 26 February and Tuesday 27 (two Ladies Downhill) and also Wednesday 28 (Super-G). Races will start at 10am. As for training sessions, they are planned for Saturday 24 and Sunday 25 February at 10am

Today it’s clearly recognised that the European Cup (and the FIS races) are an effective, beneficial and sustainable stepping stone for competition sport. They even represent an essential step on the way to the top. Nowhere else do young athletes have the possibility to gain experience on the international scene and rub shoulders with tougher competition. This is particularly useful in the speed disciplines, where it is invaluable to gain experience on different pistes. Crans-Montana is highly motivated to contribute to this promotion.