A WARM WELCOME TO
AN EXPLOSIVE WORLD CUP CELEBRATION

On Saturday 23 February 2019, on the evening of the World Cup Ladies’ Downhill in Crans-Montana, Le Régent tennis hall will take on a « Musikantenstadl » feel. In fact, DIE JUNGEN ZILLERTALER, who have been guests on this famous popular music television show 35 times, will honour us by performing within « our » walls. And they’re sure to set the venue on fire! For a quarter of a century, this most charismatic Austrian group, made up of Markus Unterladstätter, Daniel Prantl and Michael Ringler, has been travelling all over Europe, giving some 150 international concerts per year. Each time it’s a « huge » party. We promise that it’ll also be the same on the Valais Haut-Plateau. The GENDERBÜEBU, one of the best and most impressive accordian quartets in Valais, will also be playing. They’ll be warming up the audience with their exquisite blend of local music and catchy hits.

DON’T MISS THIS EVENING. PLACES ARE LIMITED, AND WE STRONGLY RECOMMEND YOU PURCHASE YOUR TICKETS ONLINE AS SOON AS POSSIBLE (CHF 40.00/PERSON). YOU CAN BUY ONLINE VIA THE BUTTON BELOW, OR FROM CRANS-MONTANA TOURIST OFFICES. PLACES ARE NOT NUMBERED. DOORS OPEN AT 19.00. FOOD WILL BE AVAILABLE. THE MUSICIANS FROM ZILLERTAL AND THE UPPER VALAIS AND THE ORGANISER WILL BE DELIGHTED IF YOU JOIN US. THE WALLS OF THE TENNIS CENTRE ARE SET TO SHAKE THIS EVENING !

(Event poster only in french) 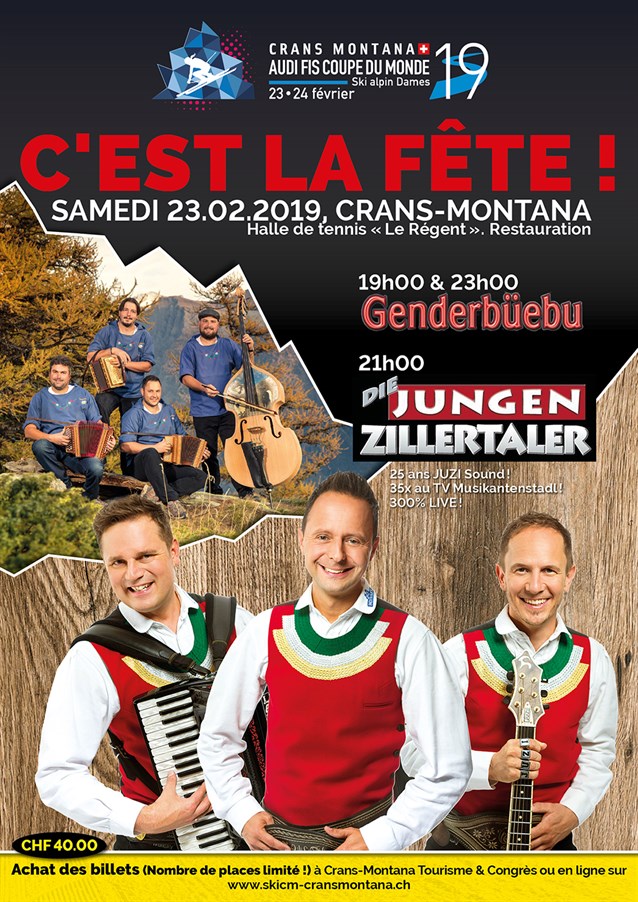 There hasn’t been a single event, festival or party where Markus Unterladstätter, Daniel Prantl and Michael Ringler’s « JUZI-Sound » has failed to excite the audience. DIE JUNGEN ZILLERTALER are frequently guests on the biggest European popular music television shows, such as the « Musikantenstadl », as mentioned above, prior to and since its new formula was unveiled. The JUZIs were invited for the first time in 1997, and played for the 35th time on the 2017/18 New Year show!

DIE JUNGEN ZILLERTALER songs delight audiences ranging from 5 to 100 years old, as they point out with some pride. Nothing is better than music which unites generations, and which we all celebrate together. The JUZIs have produced over 20 albums, including the famous « Obercool im Haifischpool » released this year, and which won them a 12th golden award. Their successes include, amongst others, two platinum records and a win in the Amadeus Austrian Music Awards.

2019 is a special year for DIE JUNGEN ZILLERTALER. This famous group are celebrating 25 years of performing. The peak of this jubilee year will be the 20th JUZI Open Air, which is held between 15 and 18 August 2019 in Strass, their homeland in Zillertal, Austria.   As they are big ski fans, the JUZI are delighted to be visiting Crans-Montana. It’s quite possible that they will also be following the Ladies’ Alpine Combined World Cup races on Sunday 24 February. But before that, they’ll be setting the atmosphere on fire on the Saturday night at « Le Régent » tennis centre, showing why their motto is  « JUZI – the absolute emperors of popular music celebrations in the Alps. Pleasure and joy, a perfect harmony of music and celebration. »

The Genderbüebu quartet of accordionists is made up of brothers Kilian and Simon Schnydrig, Raban Pfammatter and Marco Gurten. These four musicians from Upper Valais have known each other since they were children, and a great friendship has developed during these many years of playing music together. This is clear when we hear their melodies, and it has also inspired the name of their new CD « Freundschaft » (Friendship), which was launched very successfully last spring. The Genderbüebu are followed by an ever-growing fan base. There’s no need for false modesty, this quartet qualify as one of the rising stars amongst accordian groups in our country, and all the more so since they featured on the famous popular music programmes « Donnschtig Jass » and « Potz Musig » on Swiss German television. Their concert on Saturday 23 February in Crans-Montana, playing before the Die Jungen Zillertaler concert (at 19.00) and afterwards (23.00), is a well-deserved and symbolic reward, and promises to be a great moment for their loyal fans.