Almost 25,000 spectators were present for the Ladies’ World Cup Downhill and Combined in Crans-Montana on 23 and 24 February 2019. Despite a great success in sporting terms, the competitions were marred by issues with the Swiss Timing timing system that were totally beyond the control of the organisers.

Four days after the World Championships in Åre, the world’s best female skiers met in Crans-Montana. The Haut-Plateau resort, which has now established itself as a classic on the women’s World Cup circuit, organised a Downhill and Combined.

In blazing sunshine, 13,000 spectators gathered at the foot of the magnificently prepared Mont Lachaux piste on Saturday in order to watch a Downhill race in Crans-Montana for the first time since 2014. Just like the training sessions beforehand, Olympic champion Sofia Goggia dominated the competition. Whilst White Circus athletes and followers may have believed that a low starting number was necessary in order to win, the Italian proved the contrary, sporting race number 13. After a controlled downhill from start to finish, the transalpine skier outperformed Austria’s Nicole Schmidhofer by half a second, and Switzerland’ s Corinne Suter, who enjoyed a career-first World Cup podium finish,  after her two medals in the Worlds in Åre.

A huge connection problem in the Downhill

However the results of the Downhill were completely overshadowed by the many timing problems experienced  by Swiss Timing  which were totally beyond the control of the organisers, and which marred the competition. Firstly, the race had to be stopped several times to retrieve the time of several Swiss athletes. In fact the clock didn’t stop for Joana Hählen, Lara Gut-Behrami, Jasmine Flury and Priska Nufer as they crossed the finish line. Specifically, the A cell, which should have recorded the athletes’ times, did not trigger. The B cell, which replaces the A in the event of any issues, didn’t work either. A connection problem between the infrastructure installed at the finish line and the timing room was the source of the problems encountered by Swiss Timing, who were in charge of the timing on site, during the race.

In this situation, manual timing is used. Therefore Joana Hählen was placed 2nd, and Nicole Schmidhofer and Lara Gut-Behrami saw their 3rd and 4th places inversed.

While the public were celebrating Sofia Goggia, Joana Hählen and Lara Gut-Behrami at the official ceremony, which took place at the Ycoor Ice Rink, noone imagined that a new twist would arise.  In fact, 72 hours (!) after the race, the FIS announced a new official leaderboard, after another calculation of manual times which, after analysis, it was concluded had been registered incorrectly.

The 13 hundredths correction had been deducted from the skiers’ manual times instead of being added to their times. Therefore Swiss Timing recalculated all of the times using the new methodology, and confirmed the new results. Four members of the FIS working group checked these times. Joana Hählen and Lara Gut-Behrami, who were moved down to 4th and 6th  places, relinquished their podium places to Sofia Goggia, Nicole Schmidhofer and Corinne Suter.

Investigations by the FIS and Swiss Timing revealed why the timing cell at the finish line wasn’t triggered when four Swiss skiers passed it. It was due to an adjustment problem with the cell, which had been set too high. After two training sessions, the snow level had dropped due to all the skiers compacting the snow, and also due to the snow melting  in the high temperatures on the Haut-Plateau at the time.

The FIS apologised to those in charge of the races in Crans-Montana for all of these inconveniences, which had lasted several days, events which were totally beyond the control of the organisers.

Neverthless, the outcome for sport for the weekend was exceptional. The day after a wonderful party, the only ladies’ Combined of the season attracted 11,800 spectators to the foot of the Mont Lachaux piste. For the third year in a row, Italy’s Federica Brignone, who feels totally at home in Crans-Montana, took the race which crowned her the most versatile skier on the circuit. The Val d'Aosta skier beat Canada’s Roni Remme and Wendy Holdener from Schwyz after a slalom battle on the final wall of the Mont Lachaux piste, which perfectly survived the onslaught, despite the high temperatures. After the race, once the markers were removed, you couldn’t in fact even see where the skiers had passed.

Overall, 31,400 spectators attended the races, ceremonies and World Cup Party during this crazy weekend in Crans-Montana.  Rendez-vous on 22 and 23 February 2020 in the Valais resort for a women’s Downhill and Super-G.  - Johan Tachet, Ski Actu/Translation: Sarah Dunn. 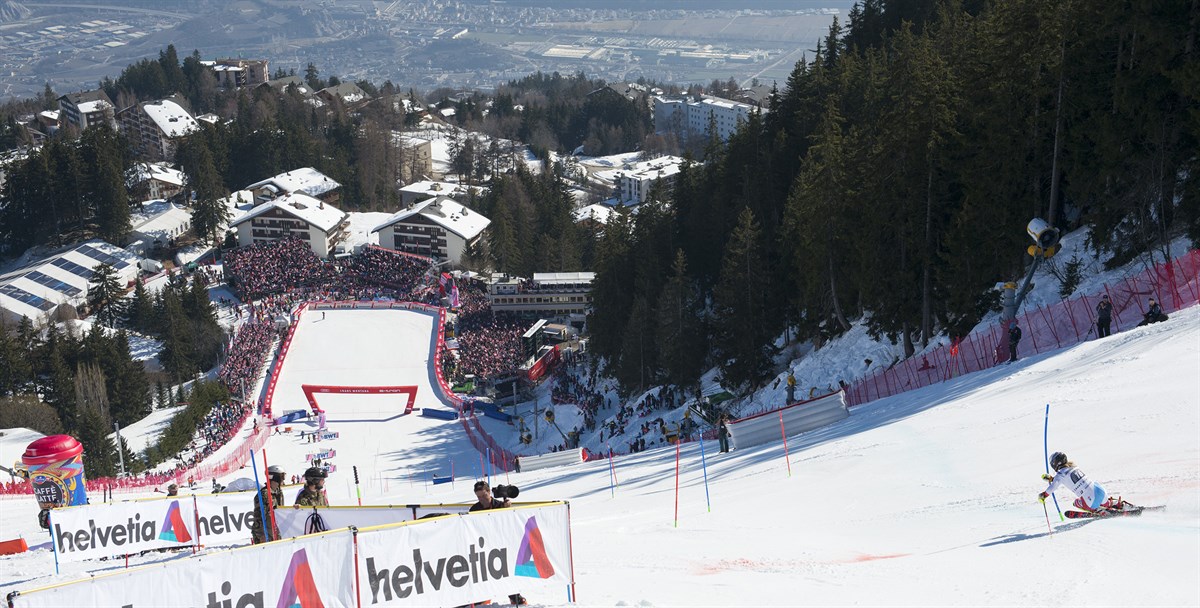