The Organising Committee of the Ladies World Cup races in Crans-Montana addresses it most sincere congratulations and gives a hats down to Lara Gut! At age 24, the woman from Ticino who finished 3rd place in the Alpine Combined at Lenzerheide had the win in the general ranking ahead of Lindsey Vonn.  The seventh Swiss woman to have won this ranking and the first after Vreni Schneider, winner of the big crystal globe in 1995.  The triumph is more than deserved: during this 2015/2016 season, she win six competitions (2 X Giant Slalom, 2 X Downhill, 1 X Super-G, and 1 X the Alpine Combined), in addition to 5 spots on the podium (3 X 2nd and 2 X 3rd).  Lara can still improve on this magnificent record during the World Cup finals that will take place next week in St. Moritz and could take the crystal globe of the Super-G, which she did two years ago.

The second Swiss highlight at Lenzerheide was accomplished by Wendy Holdener. Greatly motivated, she won the Alpine Combined there and at the same time the small crystal globe of the discipline. Thanks to this second World Cup success during the season, she places 6th in the general ranking.

The entire Swiss ladies team, its trainers and other accompanying people, with Hand Flatscher heading them, already deserve a flood of praise for their fantastic performances in 2015/2016. The many positive texts that have been written during the season speak for themselves and are sources of promising outcomes in the future. 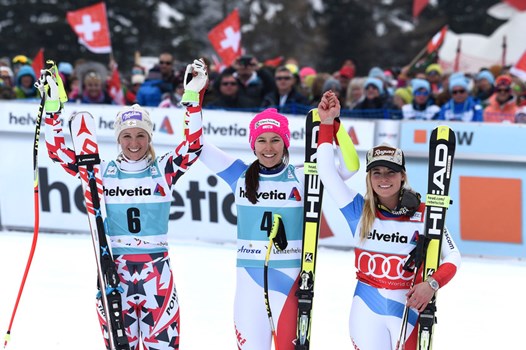