If the weather allows, Crans-Montana will be the theatre of a slalom (10:00am/1:00pm).  A race where the main attration will be Mikaela Shiffrin.

The American has not raced in slaloms since end November, at her home in Aspen.  And what slaloms!  The 20 year old phenomenon crushed the competition as never before - 3"07 ahead of the next skiier on the first day, 2"65' on the second day -, creating differences of historical amplitude in world Cups.

At the summit of her art, the Olympic champion and double world champion was stopped two weeks later in Are.  Victim of a fall during free style runs, she tore a collateral tibial ligament of the right knee, the first serious injury of her career.

"It was tough to handle for the first two weeks.  I was really frustrated, and above all after having such a good start of the season", she shared when arriving in Crans-Montana.  "However, after that I told myself that there are things to learn from this situation.  I then had a better experience recovering, and also because I knew that I had a chance to come back this winter", added the American, whose knee did not have to be operated on.

More awaited end February, her come-back was brought forward to the stop in Crans-Montana, a "blessing" to use the terms of Marius Robyr, the president of the organising committee.  "It feels good to be back.  I feel a bit nervous, but I am anxious to get back in the competition.  Nothing makes me more excited than a race", revealed Mikaela Shiffrin.

Very much impressed by Wendy Holdener

The lady skier from Colorado told us that she watched her rivals on the television during her absence.  "It was interesting as a new perspective.  I also have ot admit that I was impressed with several competitors", she revealed, dropping the name of Wendy Holdener.  "It has been several seasons that she has regular performance.  However, I consider her now as one of the best female slalom skiers of the circuit," she said about the skiier from Schwytz.

If she has not come back to she her presence, Mikaela Shiffrin admitted that she could not wind her fourth global consecutive slalom race this winter.  "I am too far behind Frida Hansdotter (red: 305 points) and Veronika Zuzulova (220).  They are too constant or me to be able to bet on a mistake on their runs at this end of season", she revealed.  "Nevertheless, I have the intention to shine during the last three slaloms and the two last giants this winter", she promised.

To prepare her return, the American went to train in Garmisch with the German team.  "The slope was steep and icy.  It was a real test.  I had good sensations, all whilst reassuring myself that my knee was in good shape, that doesn't hurt me any more", she explained.

It remains to be seen if Mikaela Shiffrin will be as imperial Monday as before her injury.  "It has been several weeks that people are asking me how I am doing.  I am now looking forward to answering them on the slope", she concluded. 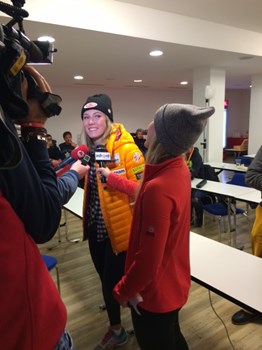