The Organising Committee for Alpine ski competitions in Crans-Montana has, in only eight years, met the challenge that even the most optimistic would dare to believe: to carry out the annual organisation of the World Cup races on the Haut-Plateau.

The International Ski Federation FIS rewarded the great efficiency and know-how of the OC, under the leadership of Marius Robyr, through the attribution of a Ladies Classic competition. The agenda of the White Circuit, in the World Cup calendar for the next five years, presented during the autumn meetings of the FIS in Zurich/Kloten, is as follows:

All of these races will take place on the spectacular Mont Lachaux slope – the Downhill Ladies slope during the World Championships in 1987 – completely modernised during the past few years.  Thanks to the chairlifts company CMA, one of the most modern mechanical snow making systems has been installed and the arrival schuss has been complemented with a new, greatly innovative and attractive jump.

When one thinks that other renowned European winter ski resorts only host World Cup races every two to three years, the impact of the ski competitions in Crans-Montana as a Classic is a solid added-value for the resort and a great act of confidence accorded by the FIS to its organisers. The Alpine ski tradition in Crans-Montana has risen from its ashes and radiates throughout the Valais.

The second significant goal of the organisers is the organisation of an FIS Alpine World Ski Championship in the mid-term. This can only be reached by achieving an impeccable annual organisation of the World Cup races. The bar is set high. The Organising Committee of Crans-Montana, in addition to political and tourism actors, are putting everything into place to reach the highest level of success. The amount of work and considerable expenditure are worth it, given the enormous impact of the annual World Cup events, without mentioning the impact of a World Championship.

As a reminder, the Swiss-Ski 2014 assembly of delegates designated Crans-Montana as the only Swiss candidate after the organisation of the 2017 World Championships in St. Moritz.  According to the FIS regulations, the application from Crans-Montana/Valais can be submitted at the FIS, at the earliest, two years after the 2017 World Championships in St. Moritz, that is to say in 2019. This would be for the 2025 FIS World Ski Championships. Hosting this new Classic would allow the testing of a number of organisational aspects in addition to the introduction of innovative projects in view of this much hoped for World Championship. The early designation of the Swiss candidate provides Crans-Montana with a margin for planning. 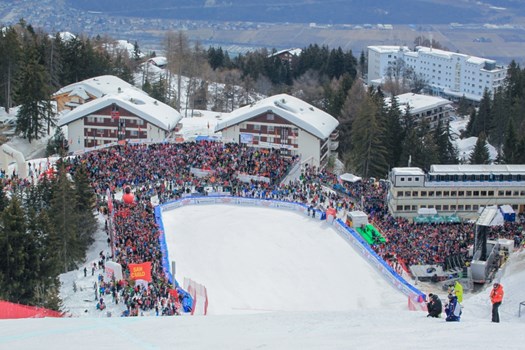